TL;DR – If you end up with an invalid filename on Windows, you can manipulate the file using the secret DOS name.

There’s a folder on my Windows 7 machine that I can’t delete! It’s called Goldberg Variations BWV 988 and was created when I backed up a CD with Media Player.

Why can’t it be deleted? Doing so gives an error saying it doesn’t exist: 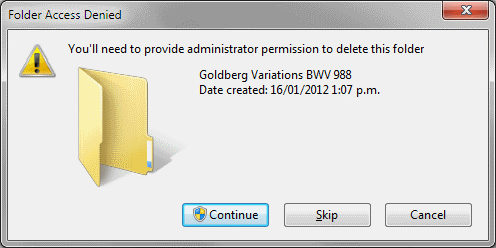 Hrm. Is it corrupted? Chkdsk doesn’t seem to think so.

Let’s try deleting it from the command prompt:

Um, what’s that space doing there? (I tab-completed the name.) Let’s try a few tricks:

Nope. Windows Media Player has somehow created a file with a name that isn’t valid, and hence can’t be removed by anything.

But wait, ancient lore from the 90s might have something to say. Being the layer-upon-crufty-layer of bloatware that it is, Windows contains a lot of legacy functionality. Including full “support” for the fixed 11 character filenames of DOS. Almost every single file on a modern Winodws 7 NTFS drive from 2012 has a secret DOS name, too. Just in case an app written in 1983 wants to open it.

The DOS names are not hard links. They are alternative names for the real links. (So if you create a hardlink, you get a DOS name for the new hardlink, too.) They are created, by default, on NTFS volumes for files whose real names do not fit within the original 8.3 DOS scheme.

GOLDBE~1, eh? I would never have guessed.

Gone. Some of that bloaty legacy code is useful, after all.

This entry was posted in Uncategorized and tagged dos, file system, windows. Bookmark the permalink.